The escape room that we made last year was so much fun that I knew that we had to do it again.  But we can’t just do the same one, that would be boring and kids would already know most of the answers.  So I knew we had to start from scratch.  That sounds really daunting but once you’ve made one, making another one is SO much easier.

When I was designing the new theme, I knew I didn’t want to do a crazy librarian’s office like I did last year, since EVERYTHING would have to be new.  So if you ever end up designing your own escape room, remember this rule: go with what you already have.  Don’t go out and buy a bunch of new stuff to fit a theme that you’ll never use again.  Whatever’s collecting dust in your basement will often make for great set dressing for your room, and you can build the theme around that.

So remembering that, I knew what my new theme would be: an art gallery!  We have a bunch of big mats and frames in our basement that I use to hang artwork for our Youth Art Show in March.  So what we did is turned our event space into an art gallery with original photos and artwork, which was used to solve the puzzles.  BRILLIANT! 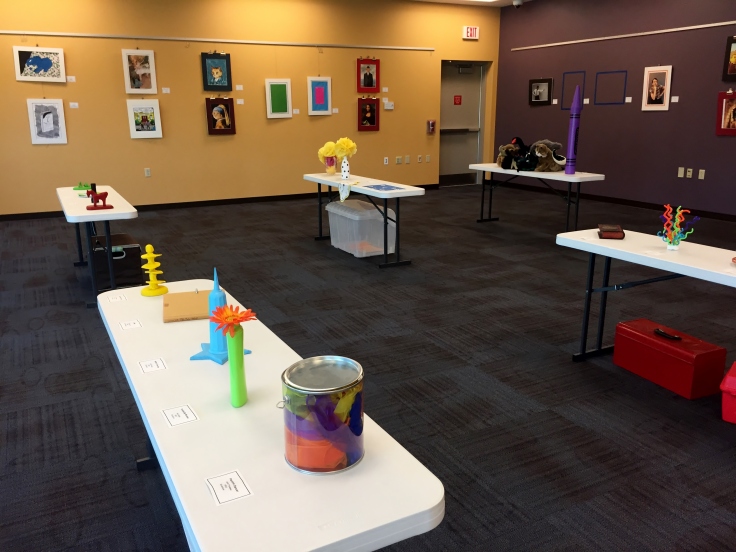 The great thing about this theme is you can decorate it as simple or as complex as you want, as we did a variety of original art and reproductions we found online.  You can make the art yourself if you have the time and the skill, like I painted this Lichtenstein-ish library comic to add some extra flare.

You can also ask your circ staff to just draw and make stuff for you on their downtime, like Jess our circ assistant comes from an art background and she made some great pieces and was a huge help.

If that doesn’t float your metaphorical boat, you can always just find stuff on the Internet and put it up.  Miss Gloria was a huge help and found some funny portraits that she hung up that the kids got a kick out of.  She also decorated the tables with a bunch of art projects she made with the younger kiddos at Craft Night.  She also came up with all of the name tags for the art pieces, which was a nice touch to make it look like an actual art gallery.

I liked that last year’s room didn’t involve anyone actually “breaking out” or escaping from the room.  So again the end goal would be to open a locked box of candy.  So this brings us to the next design rule: work backwards.  Last year, our kiddos had to solve three puzzles to find a key.  Since most of the groups figured it out fairly easily, I thought this time I would up the stakes and have them solve four puzzles.

Again, it helps to draw out a map of all your puzzles.  My final map looked like this:

Side note: getting boxes that have a latch on them in order to put locks on is always the hardest part, BUT I think I found a way around that.  Take a discarded book, drill a hole into it with a power drill, and attach a lock to it!  Such a good idea!

To get the first part of the final lock, the kiddos had to had to unlock a box with a directional lock on it.  It’s a really interesting lock that I knew I wanted to incorporate into the room, so again, I worked backwards from there to try and find a puzzle that would work with the theme. 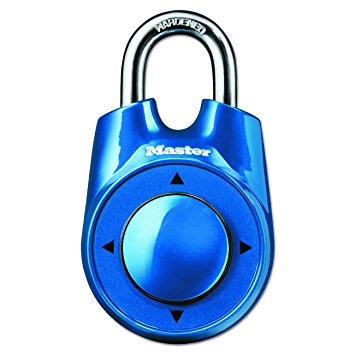 The answer for this lock was “RIGHT, DOWN, DOWN, LEFT” so I thought it would be cool to have some portraits point out the right combination.

Only problem is that two of the portraits are missing, with a tape outline on the wall as to where they should be.  The missing two pictures were locked up inside a big black portfolio case I borrowed from one of the art teachers.

I hid the key to that case in a mixed media art piece, which I made with some loose ends we had lying around the library.

Once they found that key, they could unlock the portfolio, find the missing portraits, put all four together and eventually figure out that the four portraits give the answer to the first lock.

Kiddos kinda got stuck on this one.  Some kids were confused by the third photo in the series since it kinda looks like I’m holding a thumb up and one thumb down.  So if you do this, make sure it’s clear where you are pointing.  Also this lock liked to stick, so I had to actually open it up for all 3 groups.  I did ask them what the final combination was, and when I finally got the correct answer, I would help them open it. 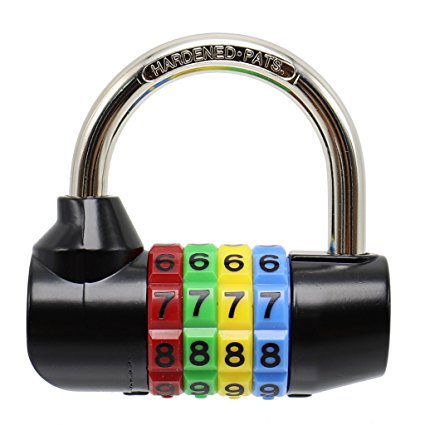 So the solution for this puzzle was “2 8 6 4.”  Each part of the lock has a specific color, which matched the exact same color as a statue placed somewhere in the escape room.  Also in the room on of the display tables will be a picture of numbers with shapes around some of the numbers.  The bases of the colored statues align perfectly with the shapes, revealing the combination!!  So for example, the first part of the lock is red and the answer is “2.”  The solid red horse’s base aligns perfectly on the picture in that space with a “2” in it.  Get it?? 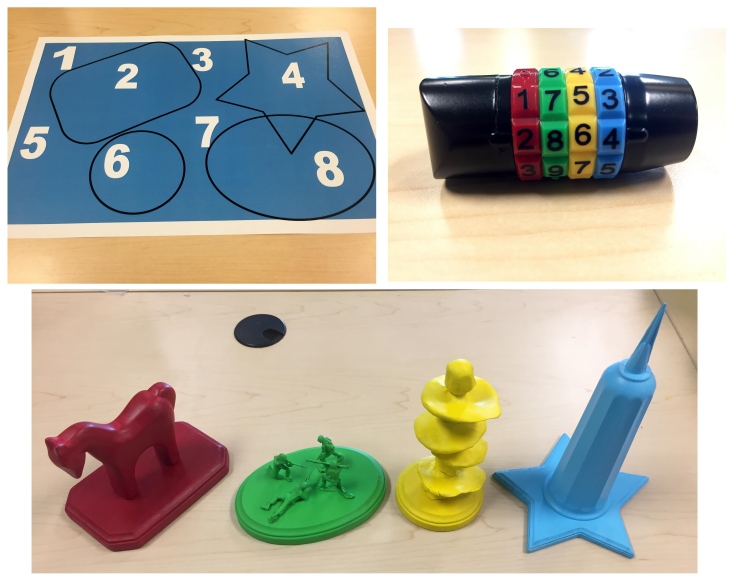 I purposefully picked the star as one of the bases so that kids would hopefully recognize it easy in the picture and on the statue.  Oh, I made these statues with stuff from the dollar store, the bases were also really cheap and can be bought at any craft store.  This was the hardest one for most of the groups, but it’s good to have at least one hard one to eat up more time.

In order to get the third part of the final lock, our kiddos had to find a way to open the word lock, which we used last year.  This is such a cool lock, and I thought this year around the answer to this lock could be a riddle that was hidden somewhere in the room.

Thinking on that, I came up with an idea of making a modern art sculpture that the kids would have to inspect at different angles to try and decipher the riddle, which would be written in “Pigpen Cipher.”  We had a bunch of slotted, cardboard squares left over from a “Cardboard Construction” day, so Jess made this abstract sculpture really easily (again–work with what you already have.)  Hidden along the panels of the sculpture were letters that corresponded with the cipher. 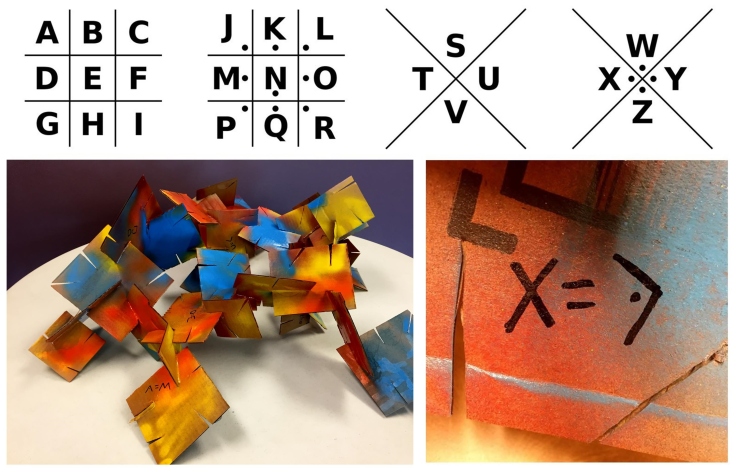 Miss Gloria came up with an easy riddle to decipher and what the answer would be for the lock.  The coded riddle was hung up on the wall like a piece of artwork, and the sculpture with the cipher on it was in the opposite side of the room, so the kids would have to run back and forth to uncode the riddle.

The last part of the lock was a standard number lock with 3 numbers.  To unlock it, they had to convert the date stamp artwork I made, which I purposely made into the date of our event.

There was a hint for what to do locked in another box with another number lock.  The combination for that lock, was the time on a Dali clock that Miss Gloria made out of clay.  That broke pretty quickly in the event unfortunately, but I did find a cheap one that you can buy:

There was a hint for that part of the puzzle, which said “check the time,” written in one of the frames in invisible ink.  We had a UV light on one of the tables, and there was a kid in each group that knew what to do with it right away.

This puzzle was all pretty standard Escape Room stuff, so I think every group finished this one first, and that’s okay!  I think it’s good to have an “easy” puzzle in there since you do have to consider the audience.

We had 3 groups that had a half hour each to break open the box, the first two groups was 30+ kiddos each, and the last group was only 12 kids.  Our first group solved it in about 20 minutes with hardly any help, but their were some teens in there that did a lot of the heavy lifting.  The second group solved it in also 20 minutes, but they got a lot more hints from me, so I might have given too many things away.  The last group was 25 minutes, and they needed a lot of help but there were probably too few kids in that group.  So we should have spaced it out a little better in retrospect.

The 2 big groups worked fairly well together, but less kids is probably better so that everyone can kinda have their moment to help out.  It’s always fascinating to see how kids solve the puzzles.  There was a group of teens that noticed that there was a connection between the cipher picture and the sculpture from “Puzzle 1.”  But instead of running back and forth like I intended, they just took a photo of the hung picture with their phone and just went back to the sculpture to figure it out.  Smart!

Like last year, we went over rules before they were all set free to work out the room.  Again, I started the clock and THEN talked about the rules, so that it was on their time, so everyone paid attention.  Rules are pretty self-explanatory and will definitely help manage your event: 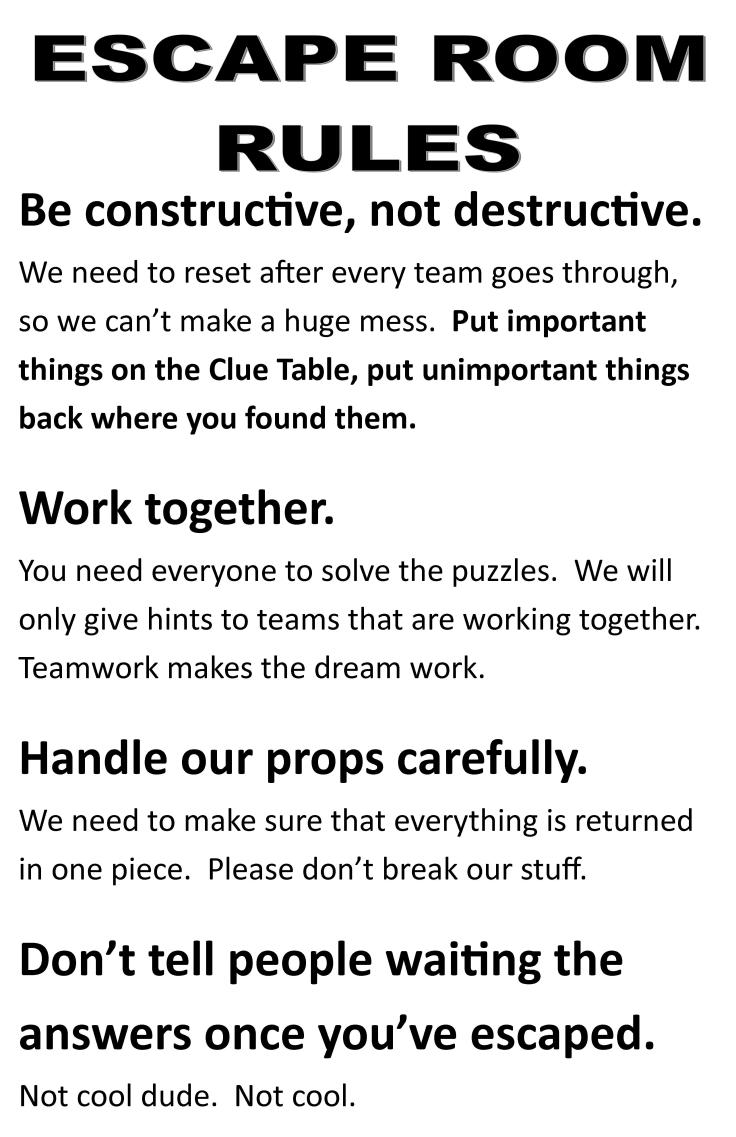 Also like last year, I stopped the group and huddled them around our clue table so that we could talk about clues and puzzles that were already solved, so that everyone was on the same page and felt included.

The biggest change from last year is I made a checklist that helped us reset the room in between groups.  That was a huge help and made the reset go really fast.  Here’s mine, all I did was take my “Room Layout” from before, and just stop and think about what steps in that layout will need to be reset, put back, and checked on to make sure it’s still in one piece.

Hope this inspired you.  If you use any parts of this, let me know how it turned out, or what you changed!!!

12 thoughts on “Tween Programming–Escape Room in the Library: YEAR 2”