Our Star Wars parties always drew a HUGE crowd, so it’s a great way to bring people into the library.  Miss Gloria and I planned one for the past two years.  They’re fun but can be a lot of work…and can get out of hand.  Learn from our mistakes and our triumphs, young Padawan.

Our program ran for one hour; the idea was for it to be a Jedi Training Academy.  So we we ran a bunch of small activity stations, with one big activity at the beginning to kick it off.  Our kickoff activity was a Death Star pinata!! 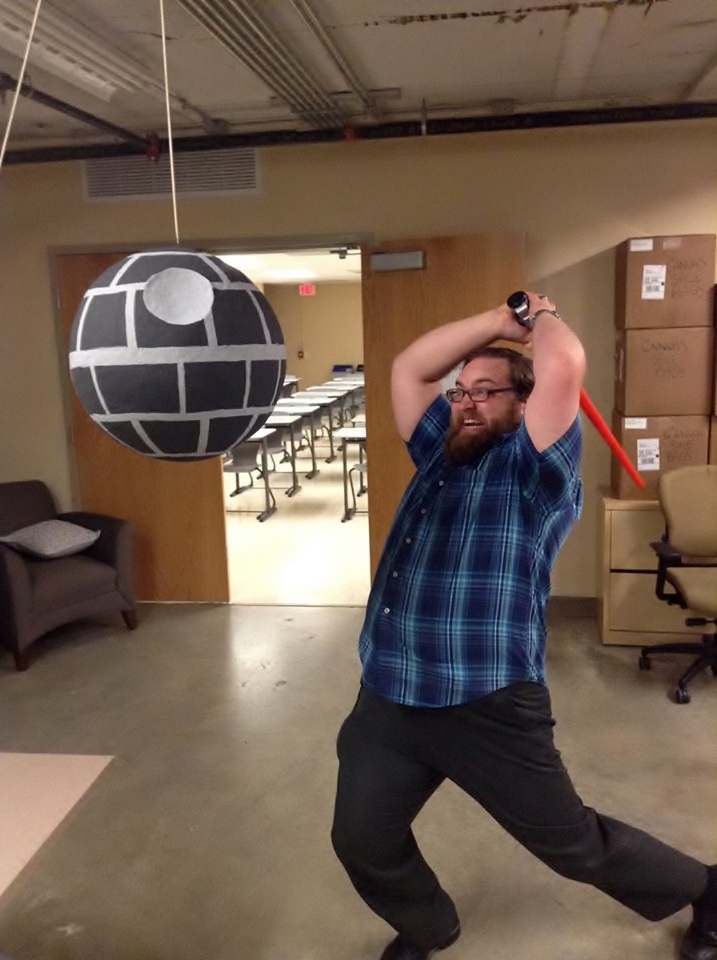 The pinata itself was easy enough to make.  Find the largest and cheapest beach ball or inflatable ball you can find.  Then cover it was paper mache, as many layers as possible.  Cut out a small circular hole, pop your ball, and scoop it out.  Fill it up with candy, take the part you cut out, and put it back upside down to create the dimple, then mache over it.  Miss Gloria made ours super cool by painting it gray, used painter’s tape to make the lines, then painted over it with darker gray to create the different segments.

Soooo the idea of a pinata is wonderful, candy and smashing things is a winning combination!!  The practicality of a pinata is another thing entirely.  It takes a lot of work to make, and you’ll probably either make it too strong or too weak.  And doing a pinata INSIDE is usually not a good idea.  Our first year with a pinata was fine, kids lined up and listened with no incident.  Our second year kids were more…free form about what the idea of a “line” meant.  So after that, we decided to not do a pinata again–so make sure your execution is well thought out if you decide to do this one.  Tape out a line ahead of time!!

After that, we walked our kids through all of our stations.  Kids are going to want to try things right away, but I made sure that all of my explanations were done before we set our kids loose.

These were just pool noodles, silver duct tape, and black electrical tape that Miss Gloria used for the detail work.  And of course I had to make Rylo Ken’s crossguard lightsaber. Pretty cheap!!

Kids at this station had to keep a balloon or two in the air for as long as possible.

It’s probably good to have a volunteer stationed here.  Because as soon as you turn your back, lightsaber duels WILL break out.  That’s to be expected, but it can get really distracting if they go on for too long.

In this station, kids had to go through a bunch of shredded paper to look for mini cardboard cutouts of Luke, Leia, and Han Solo.

If they found them all, they got a prize, which was usually a Star Wars sticker or pencil (check Party City or Target for what they have.)

This was also a lot of fun, but got kinda messy.  A volunteer or staff member basically needs to reset it every single time.  Also it’s a good idea to have TWO copies of each character in the garbage dump to make it go faster.  Thanks to Show Me Librarian for the original idea.

This was simply kids shooting at cardboard cutouts of stormtroopers.  I asked staff to bring in any Nerf guns that they had lying around.

Last year, we had a lot of younger kids that had trouble cocking the guns, thinking that they were broken, so might need to have a volunteer here too.

This one was pretty easy to make and set up.  Take a big sturdy piece of cardboard and make it into a Death Star, and cut out the laser hole.  Then make some mini-paper airplanes.

Have the kids stand and try to fly their planes through the hole and blow up the Death Star.  Just make sure your planes are actually capable of flying through the hole.  Otherwise this activity basically runs itself.  I think we originally got the idea here, though they used pool noodles instead of paper airplanes.  Airplanes just makes it cooler.

Some kids came in costume, but this is a great way to get everyone looking the part.  Just some big brown circles and yarn for the Leia buns, and some green ears and cotton balls for the hair for the Yoda ears.  Parents were great with helping their kids on this one.  Here’s the template for the ear I made if you want to steal that. 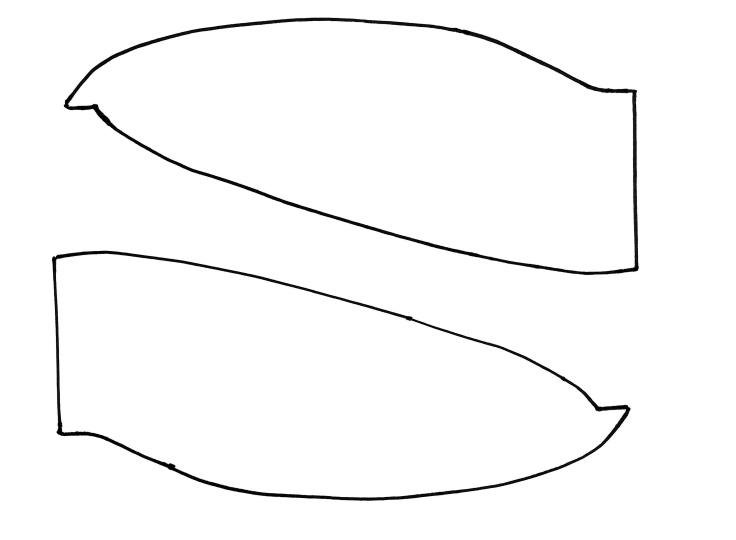 Great for photo ops!  Thanks to This Simple Home for the inspiration.

Another easy one to set up, you can see the original post here.  Cut out some droid templates from cardstock.  Then cut out some different shapes and colors to stick on your droid.  Make sure you have orange for BB-8 and blue for R2-D2, but have other colors too. 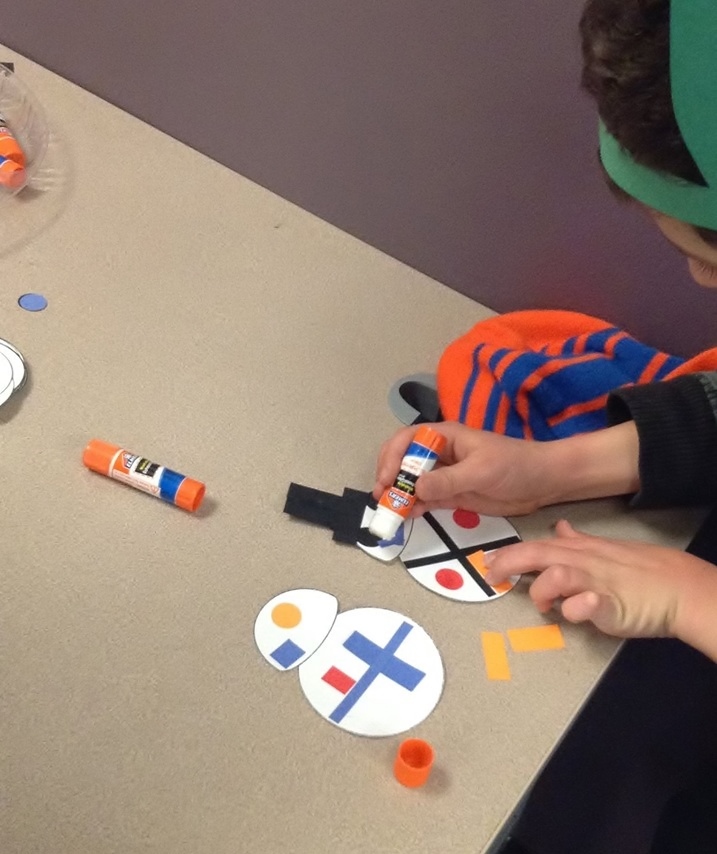 Here’s the droid template I made if you want to steal that too, you should be able to get four to a sheet: 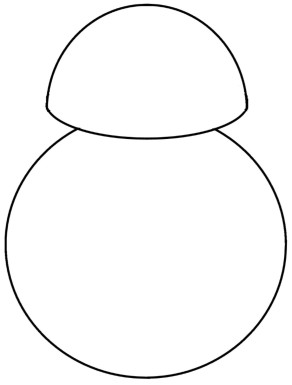 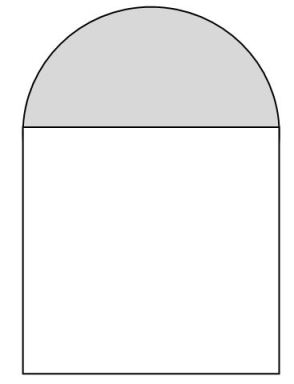 In the center of the room we had a bean bag toss game, that was kinda like a space battle.  Kids could try to sink each other’s ships!!  Our shelver Shauna was kind enough to draw this for us and we were able to slap it right on top our bean bag toss, but I’m sure you could just print out some pictures of ships and use that for the same effect. 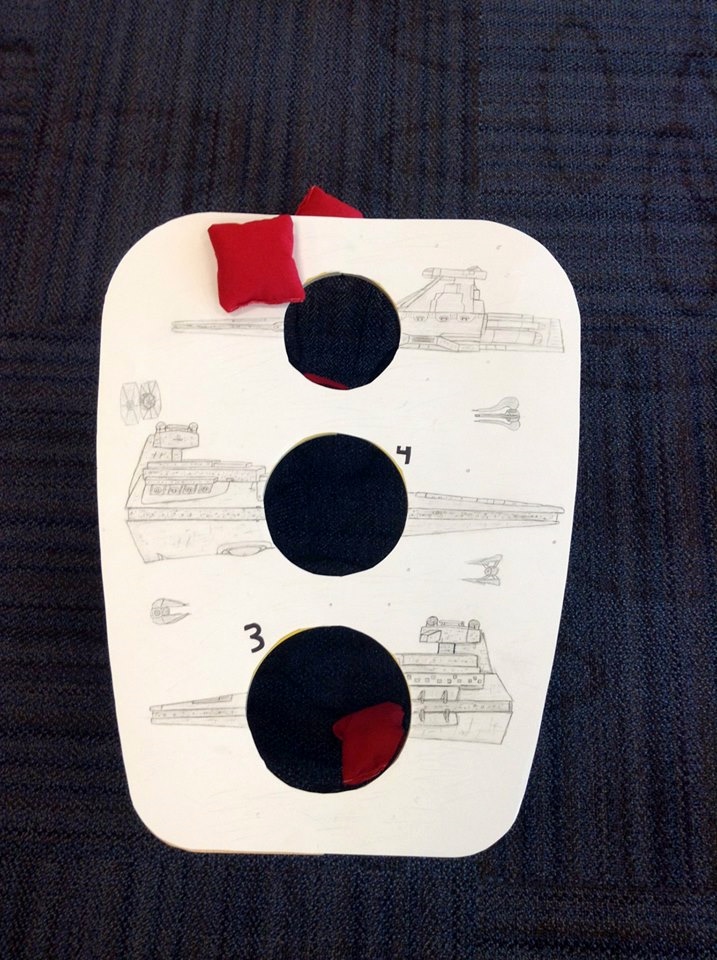 We also had a quote quiz and some Star Wars coloring sheets for kids that got bored.  I made the quiz, and yes you can steal it:

We also did some food, but nothing too fancy.  We had VaderAde, which was just lemonade, and Ewok Treats, which were just teddy grams.  Having the Star Wars soundtrack playing in the background is also a nice touch.