This is one challenge I’ve been wanting to do for awhile!!  Lego tape is such a cool invention, and I wanted to incorporate it into Lego Club and see how it went.  So after we talked about the rules of the club, I told kids that they can build anything that they want.  But they somehow have to use a piece of tape in their piece.  I brought out regular tape and asked them if they thought this would work?  They said no so I brought out Lego Tape for the win!!

I was able to find this set of Lego tape at Wal Mart on their “As Seen on TV” shelf.  You get four rolls, each containing three feet of tape.  It was around $12, so a buck a foot is a pretty good deal I think.  I was able to cut it into 6″ strips for my kids; it was a smaller group this time around so I actually had enough and didn’t need to open the second container.

The tape overall is of good quality and it does stick to mostly everything, and works great with Legos.  I just found that you have to be careful unpeeling the back, because the sticky part isn’t always attached to the actual tape the best, so it’s possible to rip that part off completely when you remove the plastic backing.  That happened to me (and only happened to me somehow) so I just stuck some double stick tape to it and it was fine.  It’s also reusable, so I had my kids save their plastic backing so I could reuse their tape once I broke everything down.  Their pieces have been in the display case for about three days now and the tape is still sticking!!  I only had to adjust one or two pieces, so I think it’s pretty quality stuff. 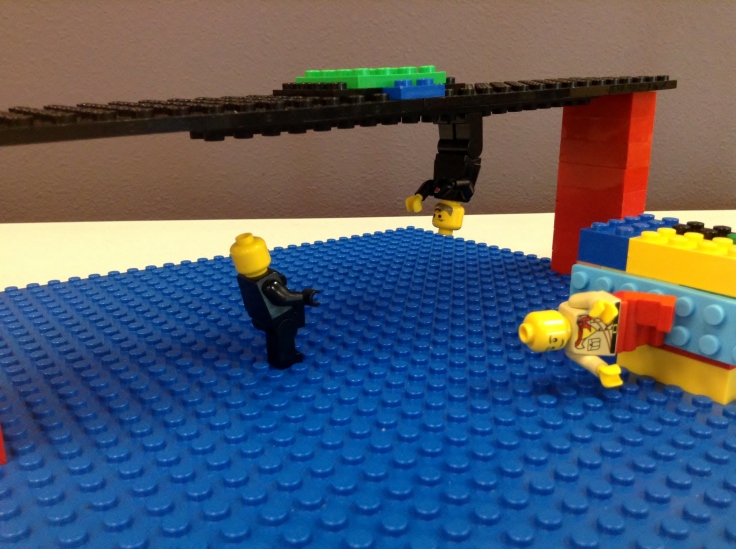 The kids loved the idea of the tape, but really had no idea how to use it or incorporate it into their piece.  A few kids actually gave their piece back at the end of the hour!!  It was a younger group than usual, so that might have been part of the problem.   Maybe I should have brainstormed with them a bit more than I usually do.  I don’t like to brainstorm with them too much since I don’t want to influence what they’re going to build.  I also might have walked around with my example a bit too late for kids to really get inspired.  So I think it was a good idea and worth repeating, but something was off this time around.  THAT’S OKAY!!  I’m learning along side the kids that way.

Here’s some of the pieces that turned out the best: