Coming up with Lego challenges that we can do at home has been a little tricky, but this one worked out pretty good!!  For this challenge, I had my kiddos build TWO different creations. For the first part, they could build whatever they wanted.  A house, a boat, a car, a houseboat, a carhouse, whatever!  It just couldn’t be too big or too tall–just something pretty simple.  When they were done, they needed to take a picture of it and then submit it as a comment on a video on our Facebook page, where I explained the rules of the challenge.  So the first part would look something like this: 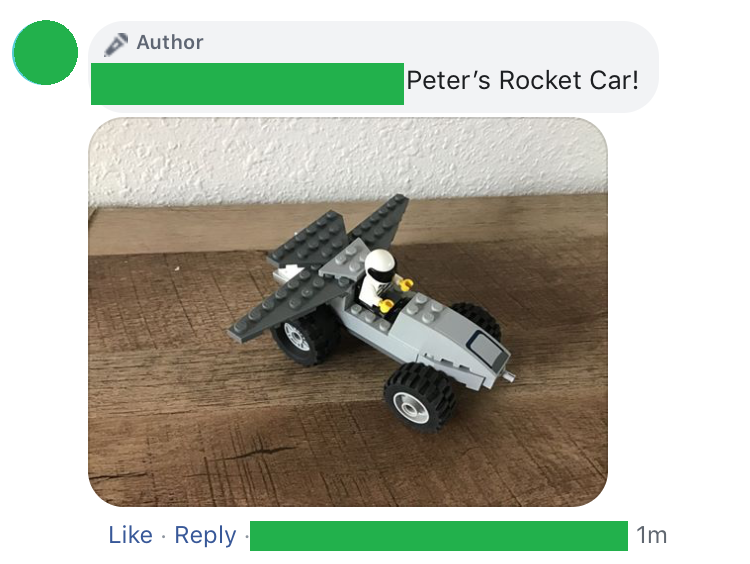 As an example, I had my wife build a really simple house.  Then I just tried to remake it using different parts.  They obviously don’t look the same, like I didn’t have a door on mine and the colors don’t match.  But that’s okay!  You can tell what it’s suppose to be by the overall shape and size.

I told them that this challenge was an example of “reverse engineering,” which means closely examining  what someone else made so you can learn how it was made in order to try and remake it. Normally in reverse engineering, you’re able to physically take apart the original creation, but that obviously isn’t possible when just looking at a photo.  So instead I told my kiddos to examine those photos closely so they could understand how it works.  For example, I showed my kiddos how I counted how many blocks high the original model house was, so that I could remake it as accurately as possible.  I also noticed details off of the original, like the roof was angled and the house had a white door off to the side.  These observations would help with your reverse engineering!

After they were done, they were suppose to take a photo of their second build and submit that to our Facebook post as well.  I also asked them to describe what they were copying, in case it wasn’t immediately clear.  So here’s my example of what Part 2 of the challenge would look like:

I made sure to tell them it didn’t matter if all the colors or all the block shapes were right.  All that was really important was getting the overall concept of the original design as accurate as possible.  Here’s one that two different kiddos made:

This one worked out decent.  Kids really responded to it and I got some great responses.  But almost all of them decided to replicate a tiny swimming pool I submitted.  It was pretty small and simple, and so most kids decided to copy that.  They did a good job, but I was hoping more people would want to copy the other designs that were submitted.  If I did this again, I might just have them try to copy one of three or four designs that I made, with varying degrees of difficulty.  I like my original idea of sharing and hoping that your design gets copied, but if there’s only 3 or 4 things to replicate, it might just make it easier.  Let me know how it worked out for you if you replicated this challenge!!

Here’s the video I used to explain the challenge to my kiddos:

One thought on “Lego Challenge–Reverse Engineering”