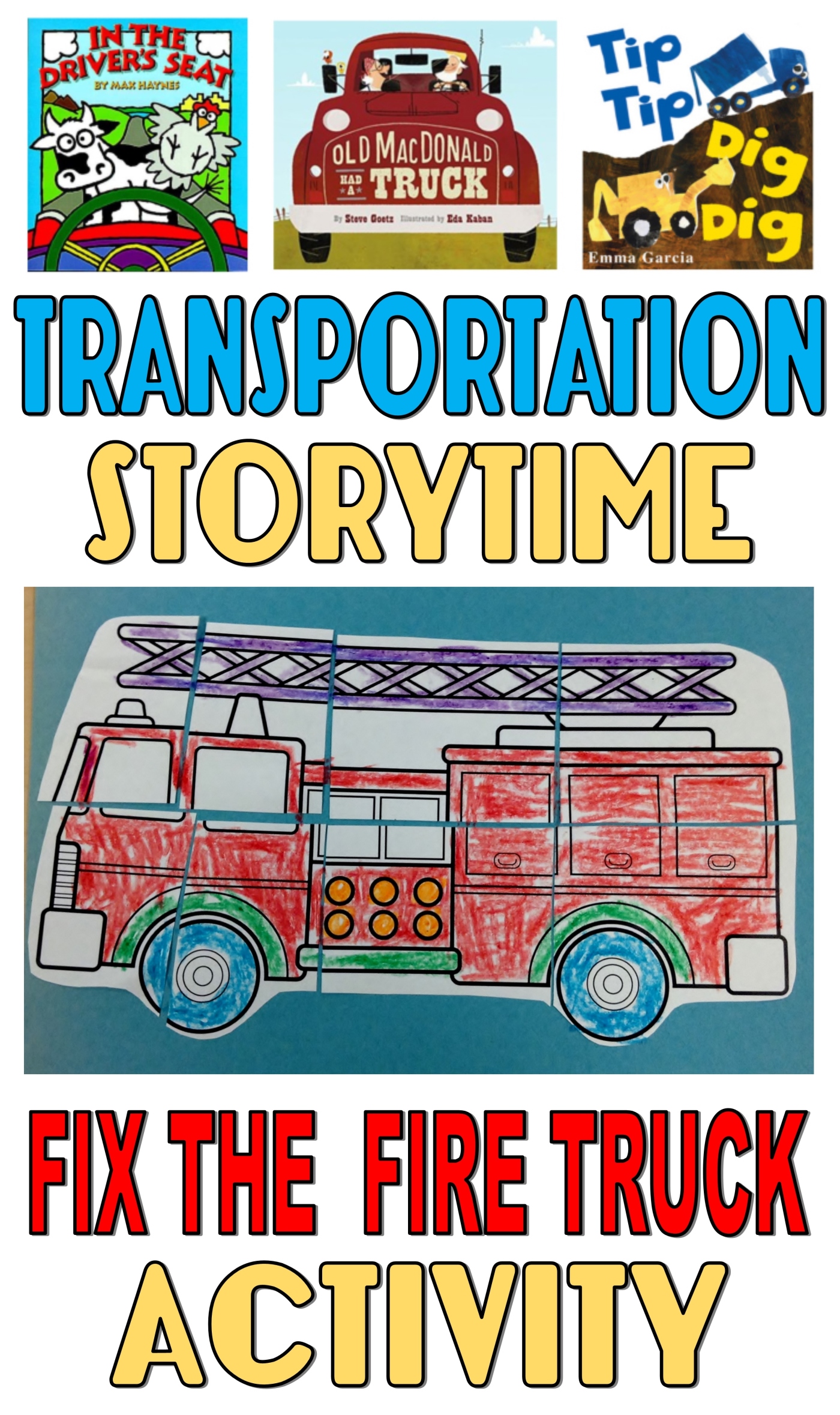 Kids love trucks.  Shocking right??  In other breaking news, the sky is blue and pie is delicious.  So when I do storytime, I usually devote at least one week a semester to the subject of transportation, because of the high interest and the huge amount of great material out there.

My storytime has a wide age gap, anywhere from 6 month-5 years.  So I always plan on only two stories, one geared for the younger kids that’s simpler and one geared for the older kids, usually with some sort of movement involved to keep younger kids engaged.  Then we usually do three rhymes or songs, and then an activity at the end.

First here’s the best books I’ve been run across:

Sound recognition is important but also just fun to do.  These books also work for younger ages, so that’s a plus.  Steve Light’s “Go” series does a great job talking about more obscure vehicles and the sounds they make.  “Moo!” is the best, it’s just one word said a bunch of different ways, so it’s a good book for emotions too.  And “Toot Toot Beep Beep” is not only great for noises, but great for an easy flannelboard.

I try to make my books as interactive as possible for those kids that don’t want to sit still.  “In the Driver’s Seat” is especially good at this.  The audience has to constantly turn left and right while reading; it’s currently out of print but it’s always been a hit for my Pre-K school visits.  “Old MacDonald had a Truck” and “Tip Tip Dig Dig” are also really interactive, kids can just do the actions that the trucks are doing. 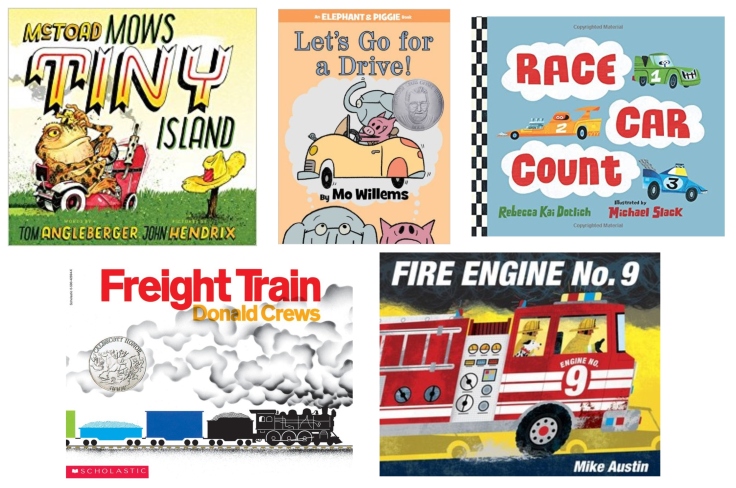 “Tiny Toad Mows Tiny Island” is good because it talks about basically every type of transportation.  “Fire Engine No. 9” is a fast, energetic story that can have some interactive elements in it.  “Freight Train” is a classic and makes for an easy flannelboard AND it’s available in big book, which is great for large groups.  Anything Steve Savage is going to be good for this theme too, easy storylines and very colorful illustrations.  Here’s a flannel I made for “Supertruck,” which also works well for winter storytime. 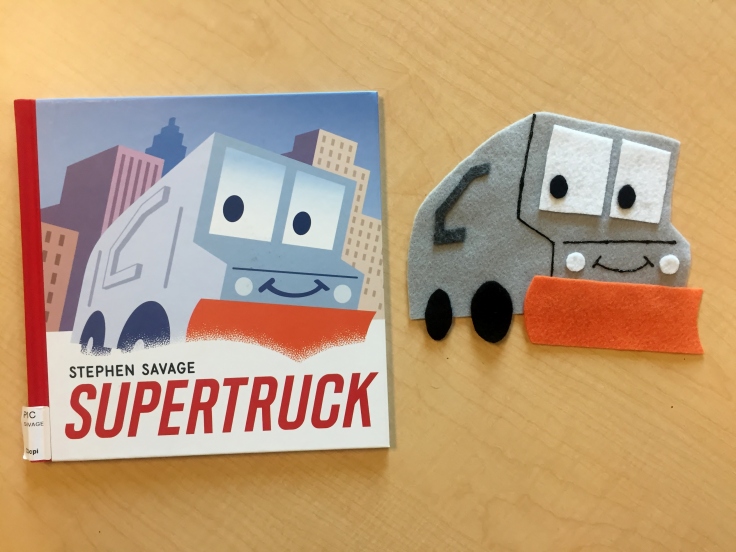 “Race Car Count” is colorful and includes counting; I was able to find all the cars online, laminate them, and then stick them up on my flannelboard, so we were able to count them all.  But one of my favorites to do is “Let’s Go for a Drive.”  Most of the Elephant and Piggies are really hard to do, but this one only requires a few props, the biggest is the sail for their pirate ship, which was easy enough for me to make out of an old map:

Ahhh Jbrary.  You make life so much easier.  I’ve used both of these for transportation storytime and kids have loved them.

We’ve also have sung “Wheels on the Bus” but instead of doing wipers and things like that, we let animals on the bus.  I’ve always asked kids which animal should be on the bus, and every once and awhile you get something funny like a giraffe or a unicorn; then we have to quickly figure out what they say on the bus!!  After we sing about that animal we let that animal off the bus, by making the doors go open and shut.  So we then we sing that and put a different animal on the bus.  We do this a few times, and then we have to race back to the library by singing “Wheels on the Bus” as fast as we can.  Kids love that part.

We usually end on a simple activity that often promotes some sort of sensory awareness.  Most of the times when I do transportation storytime, we’ve ended by doing a car wash.

It’s just a bunch of wash tubs filled with warm water, some cheap matchbox cars, and some sponges.  There’s some basic sensory awareness going on, but it also promotes sharing.  Giving a car back is asking a lot of some kids; to help them out, we tell them to “park it” back in the box.

But I borrowed our latest activity from STEM in Libraries.  Their “STEAM Storytime” had kids repairing broken paper plates by taping them back together.  That’s such a great idea that I repurposed it to fit a transportation theme.

So I started by printing out a bunch of coloring sheets, cutting them up into simple evenish squares, and then putting each broken truck into individual baggies.  After storytime I told my kids that we’ll be coloring fire trucks, but that the trucks are a little broken.  So they’ll have to first put them back together and then color them.  Miss Gloria thought it would be much easier if the kids used gluesticks instead of tape, and that seemed to work great.

I did this activity for a Pre-K school visit, and the kids really liked it.  But what I learned is to not make it too hard (I might have made a kid cry) and to walk them through the activity really quick, by saying, “What does a fire truck have on the bottom?” Tires!  “Right and they go on the bottom!  And what does a fire truck have on the top?” A ladder!  “Right and that goes on the top!”  There were still kids that needed help, but most of them figured it out.  Sharp cookies!!